Last Sunday we drove to Shropshire to pick out three pigs from a litter of Saddleback-cross-Tamworths . There were eight in the litter, and we picked the three "girls"...now named Sally "Sunshine", Trixie and Ginger Nut. It's your job to match each name to the pig, from the picture above.

The weekend was spent wrapping a goose weathervane for shipment to Scotland, priming the blackbirds weathervane for palladium leafing, and building a pigpen. Very happy pigs, dashing around in the green grass! Just as we were congratulating ourselves on a job well done, though, who should come wondering into the kitchen but the three little pigs. They must have followed their noses over the field, under the gate, across the lane, straight back into the yard, on in through the back door & into the kitchen. That'll teach us!

Hot off the bench- Blackbirds Weathervane 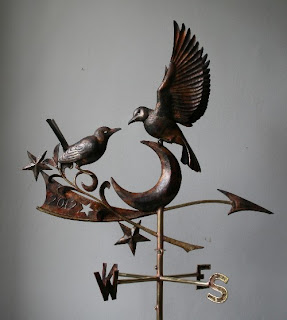 For all those clients & friends who responded to our request to join LinkedIn, Thank you.

Big news: Two of our weathervanes have been selected to compliment The American Museum in Britain's opening of "The Compassionate Eye:  Birds and Beasts from the American Museum’s Print Collection". This exhibition will feature works by some of the great American artists from the mid-20th century. The show will run from 10th March - 1st of July 2012. See the museum's website for more details about the exhibition. This is a great excuse to visit Bath, see Claverton Manor and view our monumental weathervane of Liberty, commissioned last year by the Museum to celebrate the opening of the new Folk Art Gallery.

We have 3 weathervanes in the studio on the go ( as well as several spec peices in preparation for Art in Action): a goose in flight, a barn owl and a quintessential English weathercock. 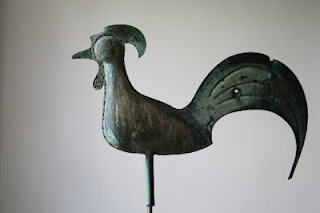 Speaking of weathercocks, here's an antique English one that I adore...look at the true patina on it, and the wonderful rivets & bullet holes in the tail.
Posted by copper at 09:23 1 comment: