Well  the fox  is packed up and off to it's new home after a blustery photo shoot.

Photo shoots are notoriously one of the more stressful elements of every commission. With the fox, the wind meant we were trying to position the vane and get the picture before the tail swung around in the wrong direction. It usually means we discard more than half the images. Occasionally we keep one of comic value, or of a strange angle or moody background. I am only sharing the one  below, because it somehow reminds me of "The Creation of Adam". Not that I would compare either the photo or the weathervane to a masterpiece by Michelangelo, but the hand still seems enigmatic.... 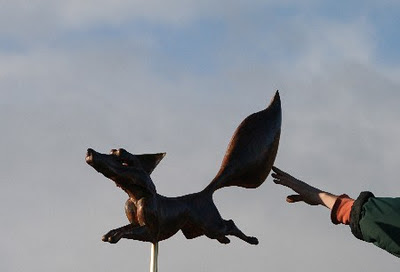 We also completed the internal dial for the heraldic ship weathervane this week. We have set up an impromptu studio gallery in the house...it creates a nice warm place to pack gift orders, gild and bring clients in from the cold, for a coffee while looking at the portfolios. 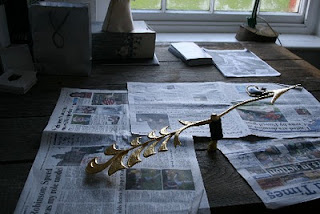 Chestnut Fencing in the Snow

Well, we had our first snow early Friday morning. It fell in heavy clumps as the barn at the back was being clad, but never promised to stick, so the crew progressed with the help of several cups of tea. For those of you following the changes around the farm and fields at Woodfield Farmhouse, I thought I would post a few pictures of the changes.
When we moved here in 2008 we must have been the two most optimistic people on the planet! Having spent 7 years in a cramped stone cottage on the moor, we had no idea the amount of money, energy & resolve this house was going to require. But the potential was undeniable. 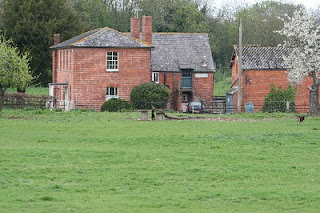 The 3 acre field at the side had a small paddock, a few cider apples, a hardy pear tree in the middle & two gangly and corrupt cherry trees facing an ancient plum.
Because the field is used for livestock, the plan was to split the field in half, and create a new orchard at the bottom. The orchard needed to include hardy tree-surrounds to deter the hungry & curious beasts. The Duchy opted for chestnut with the instruction that we should include several different fruiting trees and that the planting scheme should be random rather than in lines. The simple wire fence erected to split the top and lower fields has now also had a mixed hedge planted and a new gate. It all seems wonderful to see such radical progress in just a few months! 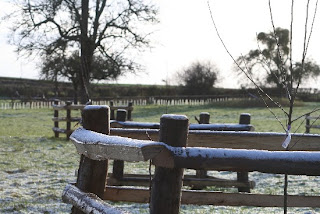 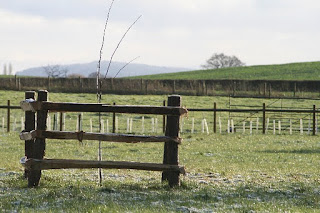 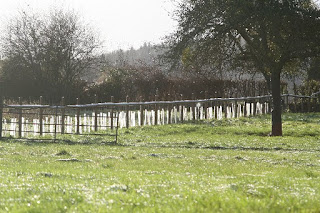 Email ThisBlogThis!Share to TwitterShare to FacebookShare to Pinterest
Labels: apples, orchard, the Duchy

A Fox on the Table

Currently on the workbench is a Stylized Fox weathervane. He only needs his hindlegs closed and a bit of lead for ballast, to balance out his over-sized tail. I have been concentrating mostly in trying to achieve a sly, foxy look in his eyes. He looks great mounted above a large set of cardinal letters. The idea of a moon (shown in the design sketch below) was discarded once the client opted for a larger size. 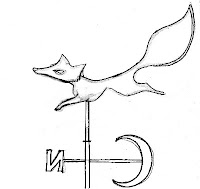 The fox is an offshoot of an earlier, and very popular design, the Hare and Moon (featured in an article last year in the Daily Telegraph). The eyes of the fox remind me a little of Mr. Toad, but more so the huge bull sculpture that now resides in Florida. I have a really great mermaid design as well, but there will be little time in the Spring to do anything "exploratory". It's so frustrating to have your head swimming with ideas and never enough time!

Our Christmas tree is up and decorated. Whew! Schools break up on Friday and then it's lots of cozy fires and a little break from all this hard work.

I wonder if it will be a white Christmas? It is certainly blustery with threatening skies.
Posted by copper at 13:00 No comments:

The end of a project 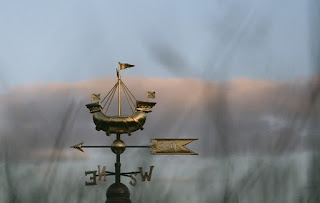 At the end of every project, the weather becomes of critical importance. After weeks on the studio workbench, a night in the bath, and a morning being scrubbed and waxed, the weathervane goes out to face the day... This is less about checking that it works (of course it works!) and more about getting a good picture. And you usually only get one chance to get it right. You need sun, and little or no wind, interesting clouds and a sense of horizon. I can tell you it isn't very often we are so lucky. The snapshot above was taken, lying flat on my stomach in a sodden field, just as the last of the days sun had disappeared over Stockley Hill. Dare I mention that  this was taken at the end of a 48 hour gilding marathon; "tired" doesn't begin to cover how I felt.
For the official portfolio picture, you will have to visit our webpage heraldic ship weathervane . 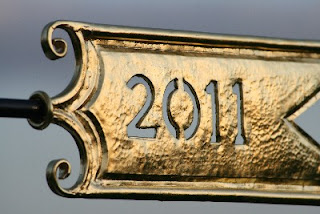 This weathervane forms part of a larger project, including a mechanism which turns an internal dial in the house. The client requested the style of this dial be inspired by & reflect the fluid lines
of their bespoke wrought iron staircase by Paul Hodgkiss. Unfortunately the staircase did not exist yet (well conceptually it did, but not actually on paper). We proposed around a dozen random ideas mostly rough sketches. The "chosen one" wasn't much more than a scribble on the back of a scrap envelope...

We wanted to keep the feeling of it being "quick" & "light"...a sketch in copper. I wonder if the gold will give it a feeling of density.
Here it is before cleaning, measuring about 600mm in length.

We did still manage to have Thanksgiving, although only a small one, in amongst this project...I even finished Hound of the Baskervilles. Having lived a mile outside Princetown and on the road to the Grimpen Mire (or the Foxtor Mire as it is actually named), it was quite rivetting to read! Now I am quite geared up to read the Great Gatsby, and perhaps after ....the Grapes of Wrath? We watched the most amazing documentary on Steinbeck. British television has such an interesting angle on American culture. It is quite enlightening to see my country from another point of view. I have given up on ever explaining Thanksgiving though!