We are working on a pair of blackbirds as a weathervane, as well as a goose in flight. Whilst the blackbirds are a totally bespoke design, the goose is numbered 5 in the series. I really like the goose, and have used it on the homepage of our current website, as well as having had postcards printed, and included it in the brochure. The first goose had a shorter neck and longer beak and sold from Cirencester market (8 years ago?). The the second one (with the beautiful long neck) sold to a diamond heir. Number three, well I would have to look in my files, but number  four found a semi-local home a few years back on a gorgeous garage with a bell tower. The Astin Martin convertible in the garage was pretty beautiful, too!

The realisation of every design begins with a full scale drawing. Below is a detail of the blackbird design, and next to the drawing is a big pile of (annealed) copper patterns ready to shape.

This is a tricky design, as the upper bird with it's wings outstretched is not facing into the wind. I have never seen or made a weathervane of a bird in flight with it's back to the wind...risky business! The ultimate reward will be if it's possible to do without reinforcing the edge of the feathers.
Posted by copper at 09:42 1 comment:

We seem to be having a run of Scottish commissions; this time a repeated design from the portfolio. The five original banner weathervanes  were completed when the studio was still on Dartmoor, back in 2004. These three new recruits have been commissioned to join the five, as the restoration project on the building is now finally complete. Eight weathervanes on eight turrets...very grand!

The banners represent the Scottish flag and included quite a number of small pieces to be assembled, including spun copper balls, rivets and brass rings. I love when the worktable looks this busy. 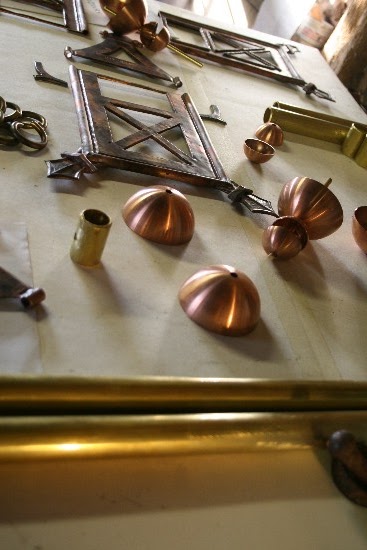 Once assembled and cleaned, they were left out on a glorious day, to dry & then into our "clean" studio for a gilding session. 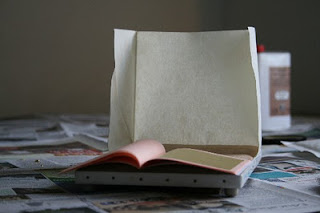 Gordon decided to do a vane a day, which meant preparing the surface the night before, and then gilding for around five hours the next morning. Three full days of gilding...not the funnest weekend, but certainly a productive one!