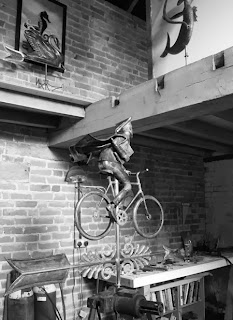 A break in the clouds allowed a last shot of the repaired copper weathervane. The copper rivets, used to restore the pointer to it's original position, can clearly be seen.

The original signature on the antique weathervane for the local church was probably the nicest "find". We stamp all our work with "GREEN" and the date and number (if the design has been repeated). In the case of the repair above (note the original patina on the copper...beautiful!) Gordon stamped his initials and "2013". Loving the hand-hammered copper rivets, allowing the repair to be undertaken without the use of the torches. I assume the original maker's mark is from 1880, but what if it's 1720!

The Elephant in the room

Our newest copper weathervane is just complete; a young elephant playing ball. The design was created with lots of input from the client as a special 80th birthday present to her husband. 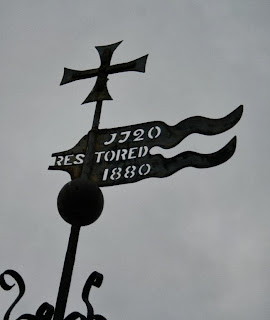 Also in the studio is the banner weathervane from our village church, needing some attention. The oak timber which had been holding the heavy wrought iron mainshaft, had rotted out leaving the vane to list. Once a weathervane is no longer plumb, the wind can do considerable damage. Luckily the parish raised the money for scaffold and the banner was saved. This antique copper weathervane, which has a beautiful verde gris, has been repaired a few times over the years, giving it a great deal of history, and should probably have been retired and displayed for all to enjoy, a replica produced to go up on the church roof. In this case however the parish wished to put the original back on it's perch. The pierced inscription reads:
1720
RESTORED
1880


Many of our weathervanes are commissioned as gifts to commemorate the end of a build,  a wedding, or a big birthday (as is the case with the pheasant weathervane pictured above). He's a reworking of a classic design from the portfolio, with ornately chiseled plumage and bronzed legs.
Posted by copper at 05:21 1 comment:

We were recently commissioned to remake our peacock weathervane with an upgraded mainshaft and more robust tail feathers. This new design is hot off the workbench.

Email ThisBlogThis!Share to TwitterShare to FacebookShare to Pinterest
Labels: Peacock 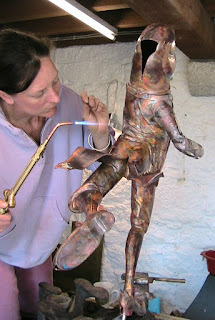 Everyone who enjoys watching artists and craftspeople at work, won't want to miss Art in Action  at Waterperry House, Oxfordshire  this year (July 18th- 21st).


Once again we will be transporting our workshop to the Metalwork and Jewellery section of the event, and hope old clients and new will visit and watch us "in action". Both Gordon and I will be on hand to explain our techniques, talk about possible commissions, and show off new work from the studio. 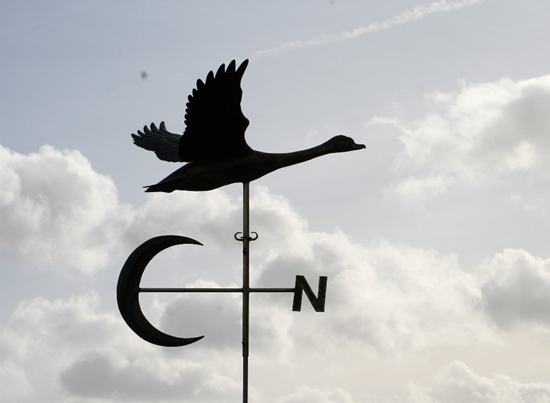 We couldn't resist getting our most recent design out in the sun for a photo shoot. This swan in flight is a reworking of an earlier design from the portfolio, and will be available for purchase soon. We started this design at "Art in Action" last year, so only 6 months from start to completion! I love it in silhouette over the moon cardinals. It reminds me of the Felix Neck t-shirt I had in the 70's (did we have the bumper sticker too?)...I am sure their logo used to be a swan silhouetted over the sun. Anyone remember?

More pictures to come!
Posted by copper at 08:22 No comments:

Flight of the Hare 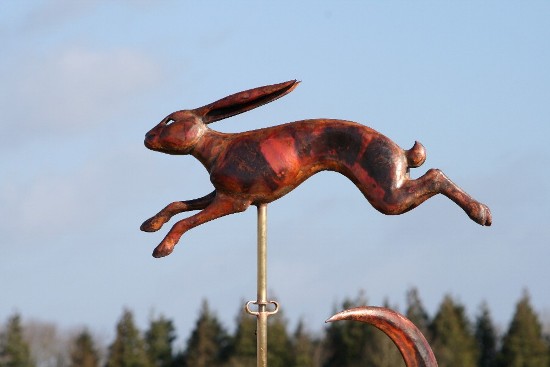 A popular weathervane from the portfolio, this version of the stylized hare is the fifth in the series.  And it's off to new it's home in New York!

The hare is photographed over the pine trees of the Duchy of Cornwall's Guy's Estate.  These managed woodlands boast dramatic views of the Golden Valley and are home to deer and pheasant. To get this view, we pulled on our wellies and tromped over a few fields dotted with hay bales. We could still see bits of snow on the Black Mountains. 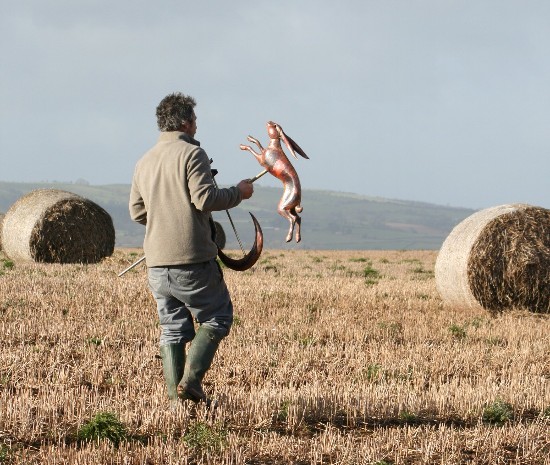 The hare measures 28 inches long, and is designed to rotate over a fixed crescent moon. The overall design measures 31 inches tall. 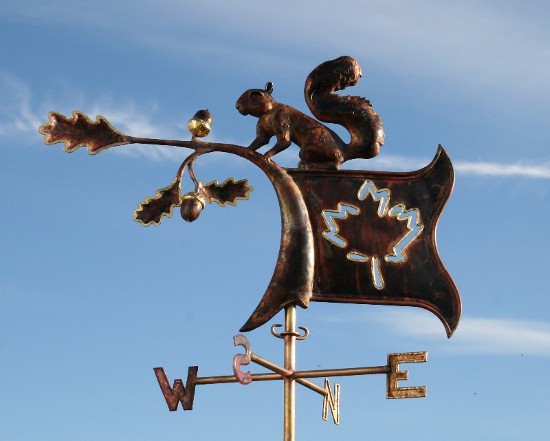 A few weathervanes went out just before Christmas with designs based on previous commissions. The first was based on our green woodpecker weathervane, replacing the shunya yantra with the client's house name. Then another based on the same design, instead using a grey squirrel and a pierced Canadian maple leaf. And finally a smaller version of our hovering kestrel weathervane.

But the breaking news is our new wood stove  (installed last week).   After much research we decided on a Relax wood stove. The guy who did the flue had never seen one before and neither had we actually, until we opened the box! It is top loading and we can pack it full of large logs, offcuts and even sawdust and it pelts out heat. Brilliant. A friend has just built a rocket stove for his workshop, so it will be interesting to compare the two as winter progresses. 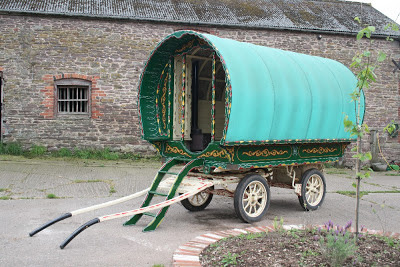 Our full advert should be  here within the next week.